The town of Jasper was originally name Rocky Mountain House but was renamed in 1817 for Jasper Hawes, who took over the trading post in the same year.*

Just before reaching the town of Jasper, along highway 16, is Jasper Lake.

Above the town of Jasper is the towering Pyramid Mountain.

There are two great hiking trails at Pyramid Mountain. However, I haven’t yet explored them. I hope to hike them this summer and post the photos I get along the way.

* Taken from “The Story Behind Alberta Names” by Harry M. Sanders

For this post I will be going back in time to February 2011. In this month I took two amazing trips with my fiance to Banff, Alberta and Jasper, Alberta. This will be a two part blog. The first part will be about Banff, Alberta and its surrounding area.

Exshaw hosts a variety of cement facilities along highway 1A that have been in operation for nearly as long as Alberta has been around. The town was named after Lieutenant William Exshaw, son-in-law to prominent railway surveyor and engineer Sir Sanford Flemming. *

Just between Exshaw and Canmore is a little lake called Gap Lake. Beyond the lake is the majestic Pigeon Mountain. 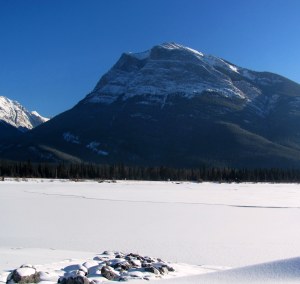 When you reach the town of Canmore, Alberta you will see the mountain called  Three Sisters, named for its triple peaks. 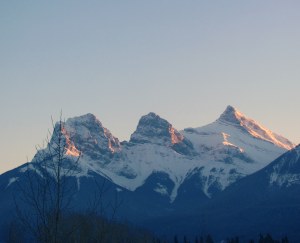 Canmore refers to the Scottish King Malcom II, who was known as Canmore. meaning
big-head” in Gaelic. Canmore’s name was chosen by Lord Strathcona (Donald A. Smith), however, the name was changed in orthography from “Kenmore” to “Canmore”.*

The most prominent mountain above the town of Banff is Mount Rundle.

* Taken from “The Story Behind Alberta Names” by Harry M. Sanders

What’s in an Albertan Name?

Alberta was named for Princess Louise Caroline Alberta (1848-1939) the wife of Marquess of Lorne. Alberta became a province in 1905. It is a vast Canadian province; from Boreal Forest, Parkland, Grassland, Foothills and Rocky Mountains. Within each of these different areas there are many types on industries. Parkland/Grassland-minning and agriculture. Rockie Mountains/Foothills-Minning and tourism. Boreal Forest- Oil.

Now what does all of this have to do with pictures? EVERYTHING! No matter where you drive in this province you are guaranteed that you will see wondrous scenery. And as a budding photographer I just can’t put my camera down! My camera is like my purse, it is one of the main items I make sure I have before I head out the door. I never know when I might come upon a wonderful picture in this beautiful province. I’m not saying that other places in the world are not beautiful, I’m just saying that sometimes you have to see the beauty right under your nose before you can see the beauty across the world. I love getting to know where I live through pictures.

That is one of the points of my blog. To show you what’s under my nose and what I see when I go elsewhere. Enough about my views on beauty, let me just show you what I mean.

Yesterday I to a trip to the Coronation, Alberta area. Coronation is  a small town about 160km east of Red Deer, Alberta. It was given its name in 1911 to honour of the coronation of King George V that same year.*

And just south east of Coronation is some colourful badlands; called the Paintearth Badlands. 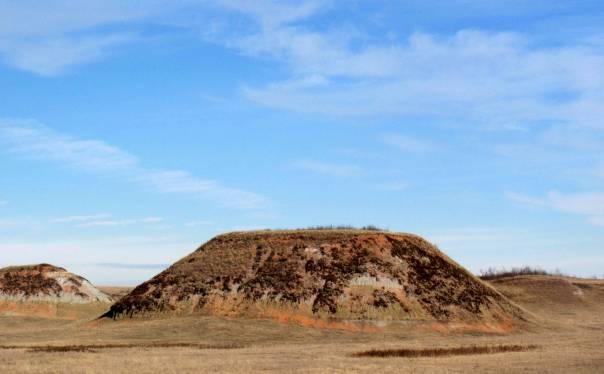 Small Part of the Paintearth Badlands

These are called the Paintearth Badlands because of the iron in the land that creates the red colour through out the buttes.

Along the way I saw someone enjoying the scenery.

View from the top of Neutral Hills

These badlands are different from the Paintearth Badlands and the Badlands near Drumheller, Alberta where they stick up from earth unlike the other two that are canyon like. 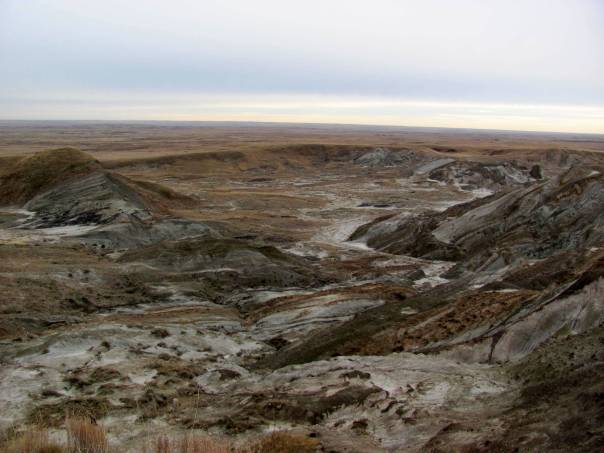 After I made this stop I headed on back home. I hope you enjoyed learning a little bit about little towns  in Alberta.

*Information from The story behind Alberta Names by Harry M. Sanders